For the children in difficulty, the ones removed from their families with a prosecutor’s order, who have found shelter in the agricultural schools of the “Ark of the World”, there is no longer insecurity in their lives and future but a clear path on solid ground. It is offered to them by the founder of the Ark, Father Antonios Papanikolaou, who breaks the vicious circle of delinquency through their healing contact with nature. That is why the youngest of the agricultural schools of the Ark, in Dimini of Volos, recently received the GENE Global Education Award 2020/2021 of the European Union. It has been operating since 2017 and is an agricultural paradise with an impressive view of the city of Volos and the Pagasitikos gulf, with a farm, orchard, olive grove, vineyards, greenhouse, garden with aromatic plants and herbs, seed bank, but also 17 well-equipped laboratories, including an olive mill, a cheese factory, a winery, a pasta making workshop, a traditional products making workshop, a feed making workshop, a stone mill. The agricultural school in Pogoniani, Ioannina, has been operating since 2015, in a beautiful landscape 800 meters from the Greek-Albanian border, while there are also branches in Chios and Kalamata.

Visit: The Ark of the World

Importance of entrepreneurial skills for the eco-farming sector

ECOFAR – Development of managerial and entrepreneurial skills of young eco-farmers via joint VET curricula, enhanced qualification profile, assessment standard and sustainable cooperation synergies
Website: www.ecofarm-manager.eu
Call: EACEA/27/2017
Key Action 3: Dedicated VET tools, sub-action: Joint qualifications in VET
597256-EPP-1-2018-1-BG-EPPKA3-VET-JQ
Start date: 01 October 2018
Duration: 30 months
The European Commission support for the production of this publication does not constitute an endorsement of the contents which reflects the views only of the authors, and the Commission cannot be held responsible for any use which may be made of the information contained therein.

Demand for water is outstripping supply in Greece and climate change is making it worse. Greece needs to act now to secure its water future.

The island of Nisyros emerges from the crystal blue waters of the Aegean, its rugged coastline dotted with dark green olive trees and whitewashed houses that cling precariously to the hillside. Against this idyllic backdrop, a ferry unloads dozens of visitors, intent on soaking up the sun as they explore the beaches, town, and famous volcano before stopping at a café for a cooling drink. Gratefully sipping a glass of cold water, most visitors are largely unaware of the true value of the transaction taking place. Here, as on many Greek islands, demand for water is outstripping supply.
Taken as a whole, Greece has one of the best per capita water supplies in the Mediterranean, but its precipitation varies enormously across the country. While the west is relatively wet and the mountains can get 85 inches (2,150mm) of rainfall a year, other regions have barely 15 inches (400mm) of rain—much less than they need to satisfy demand. This imbalance sees areas such as Attica, Thessalonica, and the southern Aegean Islands facing long-term water shortages. And climate change is set to make a bad situation worse.
By 2050, Greece could be 3.6 Fahrenheit (2°C) warmer with 18 percent less rainfall. Droughts could become more frequent and intense, while groundwater recharge, on which much of Greece depends, could continue to fall. Greece draws more than 40 percent of its usable water from groundwater aquifers—often more on the islands. But in many places, such as the island of Crete and Corinth city, groundwater is being extracted faster than it can be naturally recharged; not only does this steadily drain the aquifer but it also allows saltwater to seep in and contaminate the whole supply.
Inhabited Greek islands face particular water problems. Small catchment areas, low rainfall and geology make it impossible for some to store sufficient water, causing severe shortages during the summer when demand peaks with increased irrigation and an influx of tourists that can swell the population tenfold. Until recently, many islands had to rely on expensive water transfers from the mainland, but in the 1960’s some islands began exploring desalination. After many faltering and failed attempts, desalination is now being proposed as the best long-term water solution for the islands.
Desalination technology has advanced significantly in recent years with two methods being increasingly deployed. Reverse osmosis sees seawater pumped through a series of filtration membranes that remove the salt and minerals; multi-stage flash distillation uses heat to evaporate the water leaving the salt behind. Both methods are effective, but use a lot of energy. With few Greek Islands connected to the national power grid, this has been a major obstacle. The solution has come with significant improvements in renewable energy, especially wind and solar, making desalination more cost effective while lessening impact on the environment.
Greece already has enough desalination capacity to produce approximately 200,000 cubic meters of fresh water a day, and the national government is set to expand the number of small-scale, decentralized desalination plants to provide each island with complete water autonomy. Attention has been drawn to a solar powered desalination unit that uses reverse osmosis to provide a modest five cubic meters a day for a military base on Strongili. The system cost around $162,00 (€150,000) but is expected to pay for itself in as little as four years. Two larger plants on Kastelorizo, costing around $1.1 million (€1 million), are now producing 400 cubic meters of water a day at just one-fifth of the cost of shipping in water. Desalination is bringing fresh hope to many islands.
But it’s not just the islands that are facing a challenging water future: mainland Greece has significant problems too. Athens is one of the cities that climate change could severely impact within 30 years and it is already experiencing some degree of water shortage. Water demand in the greater Athens region is growing at an excessive and unsustainable rate—around six percent a year. This is driven by a growing urban population and an expansion beyond apartment blocks to suburban homes with thirsty gardens. Unless Greece takes urgent measures to curb water consumption and increase water efficiency, in a few years supply will simply not meet demand.

While actions need to be taken at a national level and agriculture certainly needs to reduce its over-exploitation of groundwater and wasteful irrigation practices, conserving water is something that everyone can help with. Households account for 14 percent of water consumption in Greece and it is one of the highest water users in the European Union—nearly 40 gallons (177 liters) per person per day. But there are many water saving techniques and technologies that could reduce domestic water use and with it, water stress.
In the bathroom, some Greek homes already have high-efficiency shower heads but simply taking a shorter shower can save up to 2.5 gallons (12 liters) of water every minute. Turning off faucets when washing hands or brushing teeth is simple, and aerators that mix air with the water flow can deliver a similar pressure for a fraction of the water. And although there has been some adoption of dual flush toilets, at around 2 gallons (9 liters) a flush it’s still worth not flushing every time.
In the kitchen, a dishwasher filters and recycles to use around 1.7 gallons (8 liters) of water compared to 13 gallons (60 liters) for handwashing in the sink. And not pre-rinsing dishes has been shown to save as much as 5.5 gallons (25 liters) of water while also making the dishwasher detergent more effective. For laundry, a modern, water efficient front-loading washing machine can use as little as 10 gallons (38 liters) per load. Outdoors, collecting rainwater can help irrigate gardens while greywater from sinks and showers can also be used to water plants.
Greece is currently ranked 26th for water stress in the world and its climate change predictions are bleak: around 30 percent of Greece could become desert over the next few decades. While there are solutions that could help mitigate the worst future water shortages, it is a challenge that everyone in Greece is going to have to help overcome. Building efficient desalination plants on islands such as Nisyros will likely provide residents and tourists with a refreshing glass of clean water, but everyone will need to be more mindful of what it took to get that water into the glass—the more we appreciate water, the less we will waste, and the more likely we are to secure our water future. 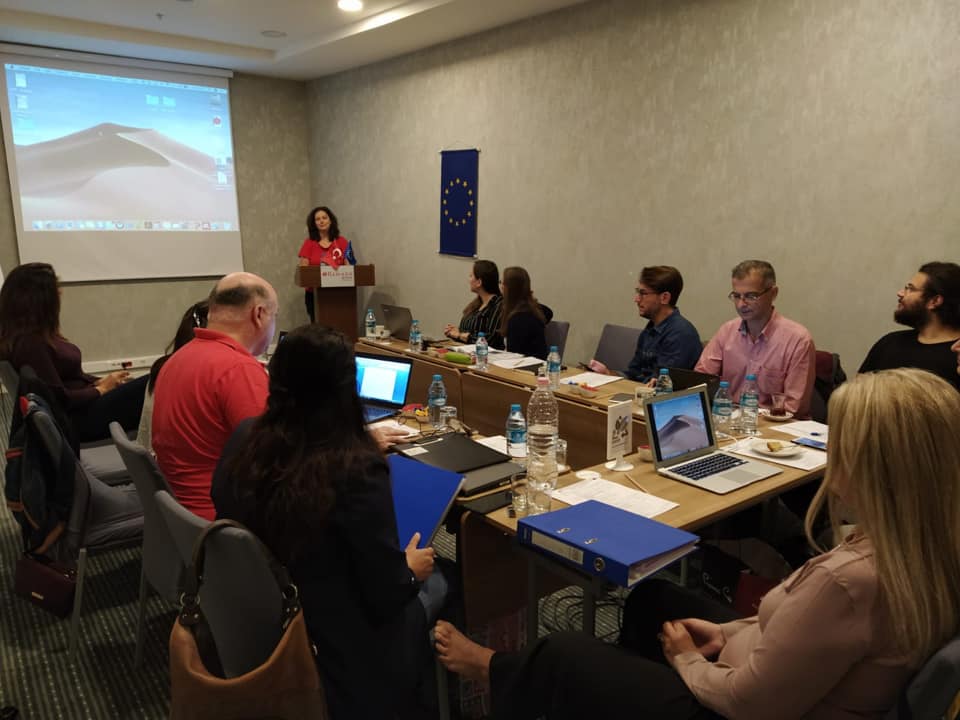 On 24-25 October 2019, we met in Kartal, Istanbul to assess our created modules and progress in the supporting animations.

EUFORA P.C. will participate to the Jean Monnet Action “European Ports Policy” of the Department of Shipping, Trade and Transport, University of the Aegean, in collaboration with PortEconomics, organises the Jean Monnet Symposium on “The future of the European Port Policy”, an international 2-day meeting of decision-makers, stakeholders and the academia, aiming to generate knowledge and advance the dialogue on the prospects of the European ports and port related initiatives. The symposium will take place in Chios, Greece, an island of strong maritime tradition, 28-29 June 2018.

In the context of the growing ecology and sustainable economy debate in the Balkans, EUFora is glad to announce a close cooperation with the Bulgarian based EcologyKM company.

This cooperation aims at bringing together both technical and education expertise which both companies have available.

We will update you soon on our common work.

This website uses cookies to improve your experience while you navigate through the website. Out of these, the cookies that are categorized as necessary are stored on your browser as they are essential for the working of basic functionalities of the website. We also use third-party cookies that help us analyze and understand how you use this website. These cookies will be stored in your browser only with your consent. You also have the option to opt-out of these cookies. But opting out of some of these cookies may affect your browsing experience.
Necessary Always Enabled
Necessary cookies are absolutely essential for the website to function properly. This category only includes cookies that ensures basic functionalities and security features of the website. These cookies do not store any personal information.
Non-necessary
Any cookies that may not be particularly necessary for the website to function and is used specifically to collect user personal data via analytics, ads, other embedded contents are termed as non-necessary cookies. It is mandatory to procure user consent prior to running these cookies on your website.
SAVE & ACCEPT